Did you know that America was changed by united prayer? Read this brief article to learn about the simple method God used to save millions of lives. You can join another united movement of prayer today at dayandnight.org.

Article: Oneness in the Spirit brought 2 million people to Christ in 1857-1858

Jeremiah Lanphier, a businessman, started a daily, noon prayer meeting in New York City. It was based on oneness in Christ rather than on doctrine or religious affiliation and wasn't connected with any denomination or Christian group. He put up a sign that read: "DAILY PRAYER MEETING From 12 to 1 o’clock. -- STOP -- 5, 10, or 20 Minutes, or the whole hour, AS YOUR TIME ADMITS," and held the first one at noon on September 23, 1857. Six men showed up the first day. 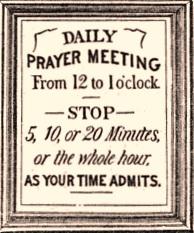 Over the next few months 10,000 people began meeting for daily prayer during their lunch hour at various locations in New York.  Then these open, unaffiliated, prayer meetings began to spread all across America.  They were interdenominational and most were started and led by businessmen and other regular people instead of by preachers. They weren't controlled by any church, religious organization, or individual.

This movement is known to history as The Layman’s Prayer Revival or The Revival of 1857 or The Third Great Awakening. Historians say that as the inclusive, noon prayer meetings spontaneously spread from city to city, more than a million people came to faith in Christ in the United States and another million in Great Britain.

Read the rest of the article here.