Driven to Revival on our Knees

The book of Esther reveals one of the most influential men of his era in the middle of an extended feast that was celebrated. King Xerxes requests that his queen parade her beauty before a council of over indulged men. She publicly refuses!  Tempers and pride flare causing her to be publicly dethroned because of advice given by his council! Pride is a funny thing in that heart of a powerful person. King Xerxes is then placed in the position to find a new queen for his kingdom. Nestled in its pages of this drama, we find a hidden biblical narrative about two very intriguing people, Hadassah and Mordecai, who are the beginning of a beautifully woven together a message of hope for revival.

Both Mordecai and Hadassah are fully practicing Jews. As this narrative unfolds,  the Jews are scattered across the Persian empire and it's apparent that they are having to survive under the rule of a mostly Gentile authority. Under this tension, even, Mordecai felt it necessary to withhold his full identity, and he requested that Hadassah hide her identity altogether with a new name, Esther. This was a sensitive time for Jewish people, and they did not have the benefits of unity nor the feeling of safety. With the Jews’ cultural intermixing with Gentiles, the Jews ran into all kinds of customs, practices, and people who posed tension on their belief system.

Haman, a close advisor of King Xerxes, was one such person that posed a tension for both Mordecai and Esther. In 1 Samuel 15:17-19, we find that King Saul, who is believed to be an ancestor of Mordecai, was given orders by God to kill all of the Amalekites. In King Saul’s disobedience, he chose to spare the Amalekite king, Agag. Haman was a direct descendant of King Agag (Holman Christian Standard Study Bible Commentary, 2010). Hence, a tension grew between Mordecai and Haman who were both aware of the Jewish and Amalekite history. The tension grows even stronger when Mordecai refused to bow to Haman in public. This conflict eventually leads to Haman plotting a course of revenge, by proposing a law to kill all known Jews. (Esther 3: 12-15)

During this time, Esther was brought to the King’s palace and finds favor with the King. She is crowned Queen!  Many people have named this a story of great romance- a powerful King who falls in love with an orphan! From rags to riches, some might say, but whatever the storyline there is a biblical truth that resonates strongly here. God positions His people for His strategic purposes in this earth!  We find these words in Esther 4:15-17:

Then Esther told them to reply to Mordecai, “Go, gather all the Jews to be found in Susa, and hold a fast on my behalf, and do not eat or drink for three days, night or day. I and my young women will also fast as you do. Then I will go to the king, though it is against the law, and if I perish, I perish." 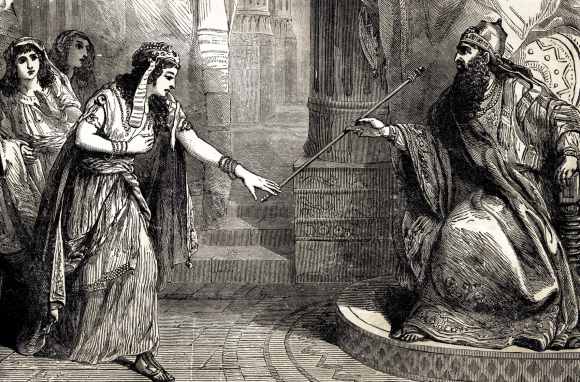 In the previous verses, we see the Holy Spirit leads Mordecai to challenge Esther to use her position as Queen to advocate to keep her fellow Jews alive. He grieves to point of “slack cloth and ashes in the presence of his non-Jewish audience in the king’’s court.” Esther 4:13-14)  Mordecai is willing to draw attention to himself and guide Esther to do the same in order to rescue their people! He challenged Esther to go before the King and reveal that her people need to be kept alive. Esther knew this could mean death, because it was illegal to go before the King without being called for during this time.

Esther is driven to her knees in with the vision of saving her people. Esther calls for a fast, no food and no drinking, for three days. Mordecai assembles the Jewish believers for the fast. Esther was desperate for God’s intervention on her husband’s heart. She was aware that no rescue would come unless God moved!  Her request was not a small one-her life, her people’s lives, and influence of a great leader to change his edict. This situation created a call for revival in the heart of a man the heart with great influence. It was a work of the Holy Spirit in two ordinary people to cultivate a “revival” in the heart of a powerful king. Esther’s fast and courageous vision leads to the rescue of her people! We, too,  need godly leadership to raise up in politics, social justice, racial equity, and spiritual formation! There is a vision that beckons God’s people now—it’s the call to be revived and serve courageously!

Lord, would you stir our hearts for hope of change in our time! “For the eyes of the Lord run to and fro throughout the whole earth, to give strong support to those whose heart is blameless toward him. (2 Chronicles 16:9). God would you send your strong support to all those reading these words! Would you move by your Holy Spirit to change the hearts of people in leadership around the world. Drive us to our knees with the vision of hope for God to rescue His people in all places around the world.