So put away all malice and all deceit and hypocrisy and envy and all slander. Like newborn infants, long for the pure spiritual milk, that by it you may grow up into salvation. - 1 Peter 2:1-2 (ESV) 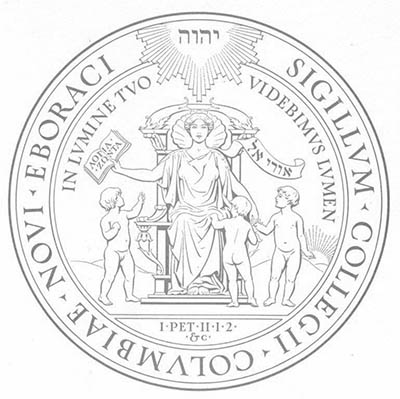 King’s College was founded in 1754, suspended instruction during the Revolutionary war, reopened as Columbia College in 1784, and later changed its name to Columbia University. Its purpose was to provide “future colonial leaders an education that would enlarge the mind, improve the understanding, polish the whole man, and qualify them to support the brightest characters in all the elevated stations in life.”  The college president taught the first classes in a building adjoining Trinity Church in downtown Manhattan, and the campus later moved north to 116th street on the West side of Manhattan.

As can be seen, “1 Peter 2:1, 2” is inscribed at the bottom of its original seal (the seal above is the original seal except for the change of the name from “King’s College” to “Columbia”). The University is represented by a woman with children at her feet, with the purpose, according to 1 Peter, of nourishing her pupils with spiritual milk so that they may grow up into salvation. She directs them to a book with the Greek letters LOGIA ZONTA, “living oracles”, the description given by Stephen to the Scriptures in Acts 7:38.

Columbia was affiliated with the Anglican Church from the beginning with the charter stipulating that the president “shall forever hereafter be a member of, and in communion with the Church of England.” But regarding students, the Trustees were not “to exclude any person of any religious denomination” from the college.

The original royal charter, granted by George the Second, placed a great deal of importance on Christian devotion on the campus. The charter states:

Like so many educational institutions in the nation’s history, Columbia University was founded to educate its students in Christian wisdom for the greater benefit of society. Colossians 2:3 declares that in Jesus Christ Himself, “are hidden all the treasures of wisdom and knowledge.” Over the centuries, the university followed the trend toward secularization, distancing itself from its faith-filled roots. It severed the intimate link between acquiring knowledge and developing true wisdom.

Any educational institution which does not center its learning on God Himself is deficient and incomplete, because all knowledge flows from Him.

Please join in prayer for the educational institutions of the United States:

Thank you and God bless you during this fast,

Selected Resources to Explore for a Cultural Revolution in Education

BOOK (208 pages): Redeeming Mathematics: A God-Centered Approach by Vern Poythress
What does God have to do with mathematics? Everything. In this book, Vern Poythress argues that the harmony of abstract mathematical truths, the physical world of things, and the personal world of our thinking depends on the existence of the Christian God.

BOOK (352 pages): Redeeming Sociology: A God-Centered Approach by Vern Poythress
In their pursuit of social welfare, sociologists and everyday citizens alike have adopted a worldview that fails to account for both the nature of God and the depravity of humankind. Ignoring God and sin has resulted in misguided analyses and ineffective solutions to societal issues. The time has come to rethink the study of sociology as those faulty assumptions have clearly affected the discipline as a whole.

"...like never before…” was a consistent theme in many of the testimonies we received from...